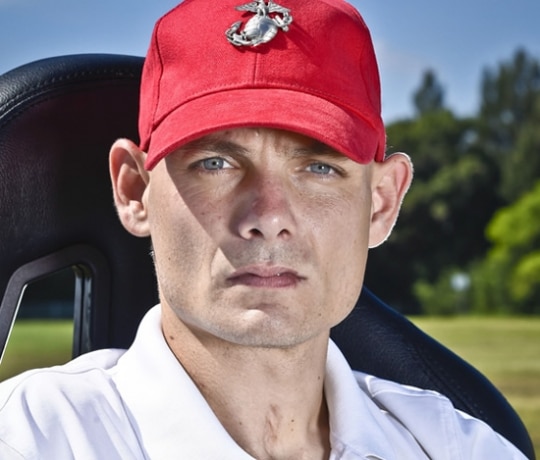 The only thing Mike DeLancey wanted was one last holiday with his family.

“My mother and father separated when I was young,” explains Mike. “I lived with my father in Pinellas Park, Florida my whole life. I have two younger sisters who I am very close with. I waited until January to enlist in the U.S. Marine Corps because I knew it might be my last holiday with them.”

Stepping right out of high school into the Marines, Mike soon realized that he’d entered a totally different world. He laughs, thinking back at it now and says, “I arrived at boot camp and immediately said to myself, ‘Uh-oh – I’m not in Kansas anymore.’”

He endured three long months of discipline, exhaustive training, and fierce competition, but that stress turned to excitement when Mike received his assignment to Marine Corps Base Hawaii at Kaneohe Bay in April 2004.

His dreams of a Hawaiian paradise didn’t last long. In November, Mike’s 3rd Battalion, 3rd Marines got the call; they were headed to Afghanistan.

“When we got there, we expected more gunfire and explosions. In reality, two months passed before anything happened, so we were on edge.” As the months crept on, Mike survived one adrenaline-filled experience after another. On September 1, 2006, during his second deployment in Haditha, Iraq, he was shot by a sniper. The bullet hit his spine.

“In an instant, I was paralyzed. It felt like I had been punched in the stomach, and I couldn’t breathe at all.” Mike was taken by helicopter to Landstuhl Regional Medical Center (LRMC) in Germany. Although he doesn’t remember much about the time he spent there, Mike is convinced LRMC has some of the best doctors in the world. They saved his life.

“The helicopter pilot giving me a thumbs-up was the last thing I remember. My next moment of consciousness was two months later when I woke up at Walter Reed National Military Medical Center (WRNMMC) in Bethesda, Maryland.” He was in the intensive care unit for 42 days and then transferred to the James A. Haley Veterans’ Hospital in Tampa, Florida to be closer to family.

In Tampa, Mike learned of Wounded Warrior Project® (WWP). “They helped me when the stress of recovery was at its greatest by providing opportunities for me and my father – my caregiver – to get away. We’ve participated in Soldier Ride®, gone on fishing trips, and met my favorite baseball players at a Tampa Bay Rays batting practice.”

Mike also joined forces with the Tampa WWP office to ride with other wounded veterans on his inaugural “Alive Ride,” to commemorate the day he was wounded and survived. He values the bond with other warriors that he has found through WWP and now he is ready to help others through their rehabilitation process. In 2015, Mike formed his own charity to allow injured veterans to experience a variety of recreational activities in a safe and reflective environment.

“I want to motivate fellow warriors to recover from their injuries as best they can and to never give up. Your Alive Day isn’t the day you almost died; it’s the day you chose to live.”