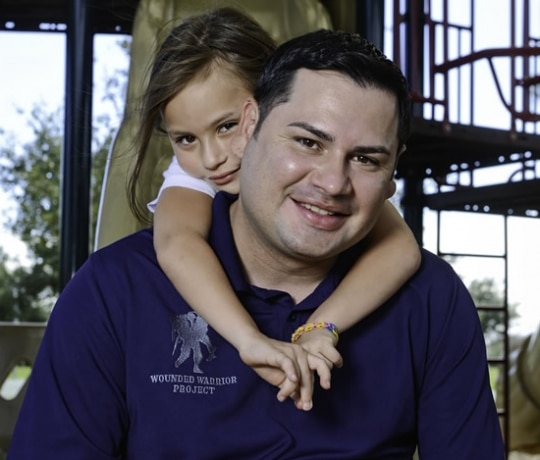 It was June of 2003 when Roberto Cruz proudly followed in his father’s footsteps and joined the Army.

He was deployed to Tikrit, Iraq in January of 2005 where he was immediately introduced to combat. “The first day I got to Iraq – I got there at night,” he says, “and then the morning after, we went on foot patrol and we started getting shot at. I was like, all right, this is Iraq.”

August 14, 2005 was a day that began much like any other. Roberto was moments from completing the day’s guard duty. He was talking to his Sergeant when he heard shots. “You get so used to it that you really don’t pay attention.”

Suddenly, Roberto was on his back. His sergeant thought he was joking and asked him to get up. But Roberto couldn’t move and he couldn’t feel his legs. “I remember them putting me in the helicopter, and giving me oxygen – then I remember I passed out. I woke up like a week after that, and I was at Walter Reed (Army Medical Center).”

It was then that doctors explained his left arm had been so badly injured it was almost amputated. Worse, the bullet had entered his back. Roberto was told he had suffered a spinal cord injury and was likely to never walk again.

Even family members would dissuade him from being hopeful. But Roberto would tell them his mind was set on walking again, and that he believed he would. “A week went by and I was wiggling my toes, and the doctors were impressed,” Roberto says. “After a year or so, I started walking with a walker.”

Still, life isn’t without its challenges. Roberto had to re¬learn how to do everyday things without the use of his left hand. He admits he was a bit depressed until he learned he was going to be a father. Today Roberto has a young daughter he describes as “his life.” He says with a sense of pride and accomplishment, “I can take care of her. I can do everything for her. I was changing diapers, doing everything like a normal person, and for me, that was amazing.”

Roberto was aware of Wounded Warrior Project® (WWP) because he remembered the much-needed WWP Backpack he received at Walter Reed Army Medical Center. He had met a number or warriors through the VA. In 2006, he and his family attended a WWP skiing event in Breckenridge.

“I never thought I was going to be able to ski,” he says, “and I was doing it with my buddies, and I was like, whoa.”

That event made Roberto curious. So he started researching WWP online and talking to warriors and learned about the TRACK™ program to help wounded warriors get a college education. The more Roberto learned, the more he realized TRACK was for him.

Roberto says it’s even better than he imagined. “I’m doing a lot better than I thought I was going to do in the classes, and it’s amazing. I like it a lot; I don’t want it to finish.” “I want to get a degree and maybe work in counseling or social work,” he says. You can’t help but get the feeling Roberto can do whatever he sets his mind to.